Odes to a Bath Toy: Love, Fame, Obsession and Regret


In 1970, Ernie performed a Grammy-nominated song that hit it big on the charts.  It was a simple song about the joy one person has for his bathtime companion.  Written by Sesame Street songwriter Jeff Moss, the song captured the fun experience of playing with bath toys, perhaps as an attempt to calm ablutophobic toddlers when it came time to bathe.  Inexplicably, the song connected with a wider audience, and Ernie's random ditty became a defining characteristic.

Due to popularity, the duck was in high demand.  Having not foreseen this reaction, Henson had only purchased a random duck from a random toy store, and could not locate a replica.  Because the duck purchased had created such a unique sound, the original duck would have to be updated with different molds each year to keep it in pristine quality.

The original duck, before modifications
The song was reshot and covered by many people, and eventually, new songs about the duck were created.  "D-U-C-K-I-E" by Christopher Cerf (who would pen later rubber duck songs) was the next major song that expanded on Ernie's love and friendship with an inanimate object.  Outside the context of the bathroom, the first signs of an unhealthy devotion began to surface.
Sitting alone in his room at night, Ernie sings to a picture of the toy.  This is not natural behavior.  It is possible that after years of Bert's annoyance with his presence, Ernie has turned to a new "friend" to fill the void in his life.  He longs to be closer with his best friend and so he uses the rubber duckie as a substitute.
Eventually, the pressure builds, and Ernie begins hallucinating about his toy.  He imagines that everybody loves the duck as much as he does.  His dreams are so vivid that he now ignores Bert entirely, having replaced him in his mind.
Ernie starts carrying the duck with him everywhere, like Linus and his blanket.  They say when your hobby starts interfering with your life, then you have an addiction.  Fortunately, a wise owl named Hoots notices Ernie's problem and puts him on the first steps towards the road to recovery.  Other guest stars join in this plea to put down the duckie!
"Put Down the Duckie" was actually praised for teaching children that it is necessary to break certain habits and let go of certain possessions as they get older.  If we prevent ourselves from experiencing new activities and meeting new people, we will stunt our intellectual growth.  It can be difficult, but in moderation, we can still enjoy the familiar past while discovering the new and different.
These songs may bring a sense of joy for your favorite childhood belongings.  So do not fret that you had to put down your duck at some point.  The memories that our belongings bring us are the actual treasures. 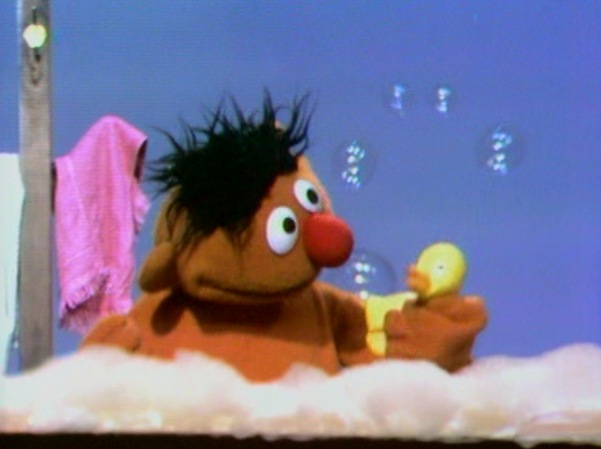 Your little buddy will always remain in your heart.
Posted by John H. at 3:53 PM