The Witches, Part 5: Of Mice and Women

Alright, strap in.  We're in the homestretch now.  Everything has been set in place, so lets watch these dominoes fall:

- Our friend the maid learns that her new "perfume" has some hairy side-effects as little patches of fur start growing where she dabbed herself with the potion. 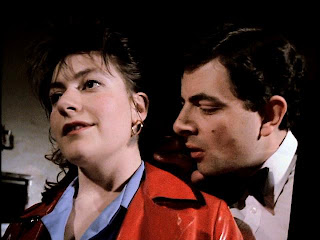 Not even Mr. Bean wants you now!

- Luke scurries out of the kitchen (and gets his tail cutoff in the process!) as the witch chef who prepared and tasted the soup begins to feel the power! 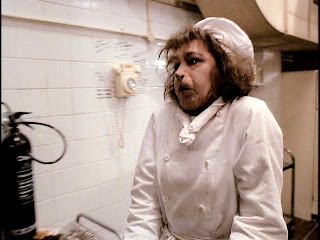 One down.  A hundred to go.

- The chef mouse attempts to alert the Grand High Witch who smooshes her into a pile of green goo, assuming she's a transformed child. 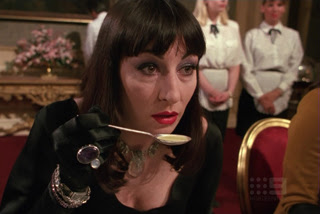 Nobody will stand in the way of my soup!

- The witch's assistant Miss Irvine eats alone in her room, Helga breaks a glass in order to get Luke from the kitchen, and Mr. Jenkins doesn't want his Cock-a-leekie soup!

- Finally, all of the witches begin turning into rats. In the chaos, Bruno finally reunites with his parents and they all quickly accept that their son will be a mouse from now on.  In the book, his parents remained heartless and passed him along to someone else to take care of, but sometimes parents can be redeeming, even in a Roald Dahl adaptation.

As the witches all become mice, the kitchen staff lead by Mr. Bean begins killing as many mice as they can find.  Helga traps the Grand High Mouse under a glass where Bean can take his cleaver and end her reign of terror in England. 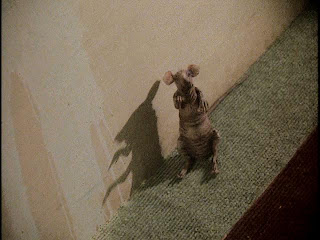 That was a little anti-climatic.  I mean, we never did learn about her history with Helga.

Finally, when all is said and done, Luke (still as a mouse) prepares to leave the hotel by attaching an address label to the Grand High Witch's suitcase filled with money (as well as an address book with the names of every witch in America).  Luke and his grandmother are going to be witch hunters from now on, and he is content to live out the rest of his days as a mouse in his awesome Lego-mouse habitat that takes up the whole house.

And that's the end of The Witches! So, some final thoughts on this story.  It...wait a minute...the movie's still going?

"Don't you forget about me." - Simple Minds

Oh yeah, Miss Irvine.  What's she up to?  Oh, she decides to reverse the spell on Luke and Bruno.  Well isn't that nice of her?  Yes, she just shows up outside Luke's house, reverts him to his previous state, and returns his glasses and pet mice.  Isn't that sweet? 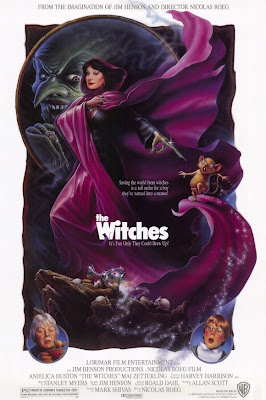 What a happy ending for all!

Alright, now the movie is actually over.  And Roald Dahl was peeved.

See, Miss Irvine doesn't exist in the original story.  All of the witches are evil, and their magic is irreversible, meaning that Luke remains a mouse, shorter life span and all.  Tension arose among the producers of this film in changing the ending.  As is explained in Henson's letter to Dahl's publishing company, both endings were filmed and tested, and it seemed best for the movie studios (as well as the sanity of the child audience) to opt for the happier ending. 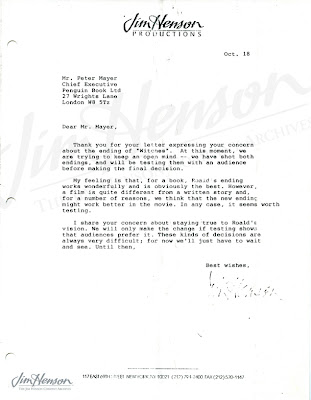 This is the issue that often occurs in film adaptations of books.  Some elements just aren't going to translate to the new medium, meaning that people are going to have to be creative.  And although I feel that the book ends as it should, with Luke remaining a mouse, Henson's final decision to stick with the happier ending makes this movie work.  For three reasons.

As is typical of Dahl stories, there is a lot of scary imagery and themes prevalent throughout the film.  Although there is comedy and heart, kids will still remember elements that aren't as frightening to adults.  Kids trapped in paintings, evil witches disguised as kindly ladies, and the horrific transformation sequences is already leaving behind some emotional scars on the young audience.  The audience has earned a bit of visual relief.  A bittersweet ending would be unusual of a children's film and would go against the tone set up by the rest of the story.  Luke has done nothing wrong.  There is no need for him to be punished forever.  I suppose that's how life goes, but it's not a lesson we expect to find in an average children's fantasy.

Clearly, Helga and the Grand High Witch have battled before.  It's never fully explained, but they had some encounter with the Grand High Witch getting the upper hand.  If Luke stays a mouse, then the Grand High Witch would still have the last laugh, even after her defeat.  Helga has been through enough.  She doesn't need to go through watching her grandson live out a short life as a mouse.  Helga has earned the right to happiness.  Yes, Luke is content to remain a mouse, but he's just a kid and doesn't really understand the situation.  Helga is the one who suffers the most.  Let her have this one.

Although the assistant to the witches had very little to do during the film, her role was important and filled a void present in the original story.  Without Miss Irvine, the women in the story would be depicted as completely ugly and evil, both inside and out.  Notice how sexist the characteristics of witches are.  They don't wear attractive shoes?  They don't have pretty hair?  They don't have well groomed fingernails?  This story is basically telling us that women with unconventional appearances should be shunned and feared.

Dahl rarely has sympathetic adults in his stories.  They have to be really young, like Miss Honey from Matilda or really old, like Charlie's grandparents from Charlie and the Chocolate Factory in order to be decent human beings.  So, when the main group of villains are all female, the story comes off as a bit misogynistic.  All (unattractive) women are witches!

This is why we needed Miss Irvine.  She was a witch in training, and as a result, was not treated fairly.  After she is scorned from her clan, there is a brief scene in which we see her all alone and some internal voice says that she never wanted to be one of them anyway.  Yet, by the end, she earns the right to use magic powers.

By including Miss Irvine, we see that good witches do exist in this universe.  No longer are we supposed to completely write off an entire gender.  Irvine breaks the mold and sets about on her own personal journey to give witches/women a good name.  The most telling moment is when she reveals that her ungloved hand is not dry and grotesque like those of other witches.  This implies that by using magic for good, she no longer has to hide herself from society.  The other witches wear the signs of their evil behavior on their skin.  Irvine has shown us that women/witches can make their own choices and become successful without resorting to evil.

Should this movie be part of the Henson canon?

I would say so.  Like Labyrinth, the film straddles the boundary between kids fare and adult entertainment.  There is a campiness to the portrayal of the witches, but nothing ever gets too cheesy.  The movie movies along pretty quickly and each character is fully developed and fun.  And, with Henson's approval of the addition of Miss Irvine, I would classify her as part of the Henson universe.  She represented an element that was missing from the original story and managed to by sympathetic and crucial with only a few lines of dialogue.

This Halloween night, I'd recommend to check out The Witches (or revisit it if you saw it as a child).  The story and special effects hold up quite well, the humor is delightfully witty and clever, and it can still provide some lasting scares.  It's not the best children's fantasy movie, but it deserves its spot in your Halloween library.
Posted by John H. at 4:04 PM