Luke and his grandmother move into the Hotel Excelsior! where surely nothing could possibli go wrong.  ...Possibly go wrong. 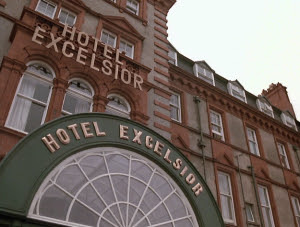 As if on cue, Anjelica Houston arrives complete with a sinister musical sting.  I don't want to jump to any conclusions, but I'm pretty sure she's a witch.  Also, Mr. Bean owns the hotel.  Things are going to get wacky.

After settling in the room, Luke explores the hotel and discovers the most Roald-Dahl-esque child to ever exist.  This is Bruno Jenkins.  If Augustus Gloop and Veruca Salt merged into a single entity, Bruno would be the result.  We find him alone in the dining room eating the raisins out of the pastries and putting the remnants back on the serving dish.

Willy Wonka would destroy you, Bruno.

As the Houston leads many women through the hotel, it is clear that some sort of witches convention is in town.  In case this wasn't clear to us, she pauses by a painting that has another small child trapped inside of it.  Luke had better watch himself.

But Luke's already getting into trouble as Mr. Bean confronts him for letting his mice run free.  After an absurd exchange in which the hotel manager barges into the boy's hotel room without permission and the grandmother claims that Luke should be allowed to keep the mice since there are most likely rats in the kitchen, it is decided that mouse traps should be put up all over the hotel.  This is foreshadowing!

Back down in the dining hall, we meet Bruno Jenkins's parents (who are still alive and therefore despicable human beings, as all Dahl adults are) as Mr. Bean notices that the pastries have been nibbled on by the non-existent rats/Bruno. 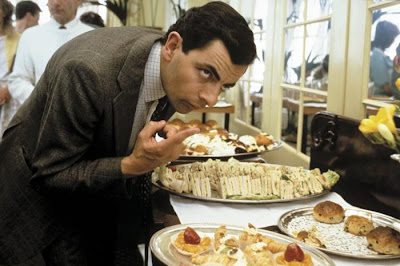 Rowan Atkinson can make any film a classic.

Grandma Helga notices Anjelica Houston looking at her and has the strange sense that she has met her before... 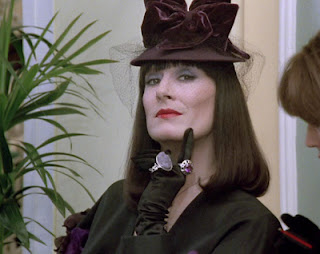 GRANDMA HELGA!  GET YOUR GRANDSON OUT OF THERE!  HOW IS THIS NOT CLEAR?!

But it's too late.  Houston seemingly spiked Grandma's tea with magic...or sugar and Grandma will be out of commission for a while, leaving Luke free to practice his mouse circus act in the empty ballroom  at the hotel.  But it just so happens that this is where the Witch Convention is taking place, under the guise of the "Society for the Prevention of Cruelty to Children." 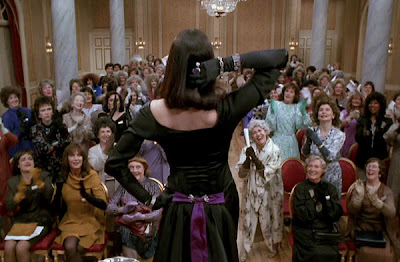 The Horrors of Event Room B.

Hiding behind a screen, Luke observes the witches as they de-wig.  Why they do not smell him is not entirely clear, but no matter.  We need to see what these witches are up to.  Apparently, Houston is the Grand High Witch, and she is the ugliest, foulest, scabbiest witch of them all.  Here is where the Henson effects team has come in and kudos to Houston for wearing this get up for over half of her screen time. 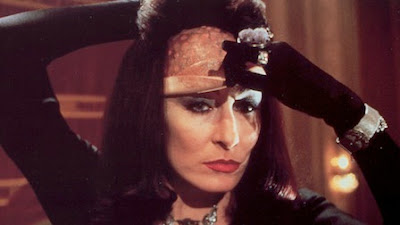 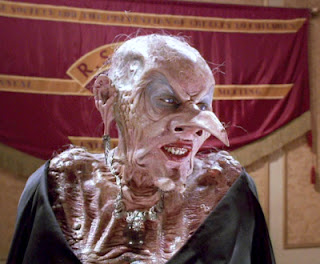 The Grand High Witch firsts lambasts her fellow witches for not meeting the yearly quota of child deaths.  Apparently one child a week just isn't cutting it.  After smiting one of her own kind for daring to speak against her, the Grand High Witch reveals her new plan.  All witches in England shall leave their jobs and open up candy stores.  Although this would probably have some negative effects on the nation's economy (not to mention the many eyebrows this career move will raise), the Grand High Witch is certain that her plan is fool proof.  Because the candy will be laced with "Forumla 86." 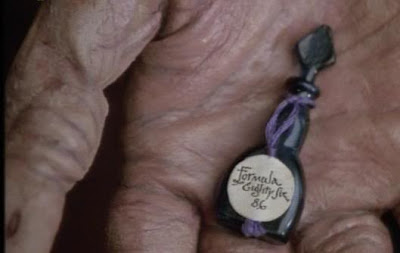 Just what does this potion do?  Tune in tomorrow to find out!
Posted by John H. at 6:38 PM