A month ago during my Muppets from Space review, I teased you about the identity of a random old Muppet butler that was shacking up with the rest of the crew in their summer house.  In order to fully understand who this character is, we must return to the depths of Muppets Tonight.

Now, you may not have been aware that during the original run of The Muppet Show, our friends in England were privy to two extra minutes of Muppet material that was unseen in America (except for later video releases).  These segments were called "UK Spots" because they were made to compensate for the fact that British television had shorter commercial breaks than the U.S.  These spots were usually an additional song or an unrelated backstage scene that didn't affect the overall plot of a particular episode.  Unfortunately for Muppet purists, many great moments only existed in these U.K. Spots, but fortunately, they have since all been recorded and documented.

Muppets Tonight also featured U.K. Spots.  But rather than just film new songs or scenes, the U.K. got their own series of recurring segments.  They actually got four of these series!  They had six extra secondary characters, and it is time to introduce these isolated characters to the rest of the world!

First up is The Tubmans of Porksmith (later rechristened Boarshead Revisited). 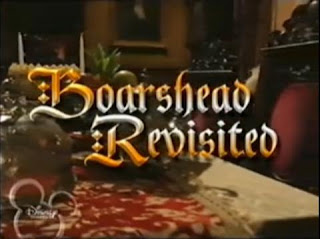 So, what is the first thing one would put into a show that they know won't be seen by American audiences?  Why a big fat American pig of course! 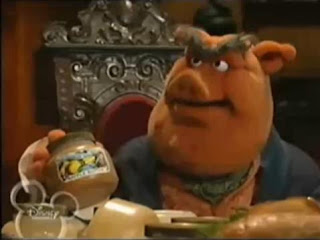 You can never have too much apple butter, you grotesque swine.

Yes, our hero is Howard Tubman, heir to America's oldest and fattest family.  He lives alone in a mansion, gorging himself on all varieties of food.  But he is not embittered or lonely.  He is quite content to stuff his face.  Plus, he has his butler Carter to tend to is many needs, such as walking. 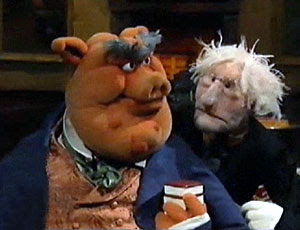 The weak, frail old servant can do no more than to shake his weary head at his employer's lifestyle.  Tubman presumably eats all of the food in the house, leaving Carter to be nothing more than skin and bones.  Carter assists Tubman on his exploits to lose weight, either by hiding food or getting him nto shape.  But whiny Tubman's demands and abuse are all that result from these endeavors.  Despite his attempts to get fit, Tubman seems quite happy with his lot in life.  So what if he can't fit into his pants?  At least he's enjoying himself.

The duo represent opposite philosophies towards indulgence, which mirrors the stereotypes of American and British culture.  Americans are greedy, lazy, and obese while the Brits are hard-working and silently suffering.  You'd think this would be offensive but, hey, it's the Muppets.  Sometimes it helps to hold a mirror up to society and laugh at your foibles.  Are all Americans like Howard Tubman?  Of course not.  But we can recognize and respect the ribbing at our expense.  At least, we should.

Otherwise, we might fight back.  You know, if it didn't take so much effort. 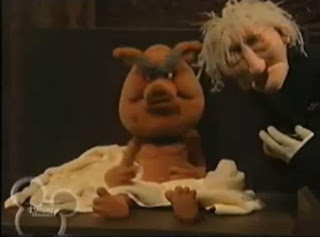