Can You Tell Me How to Get Back to Sesame Street?


Where is Sesame Street?

Clues within the show suggest that it is in New York City.  But that's like saying Santa's Workshop is at the North Pole.  We can travel there and look far and wide, but we'll never truly find Sesame Street.

Like Oz, Neverland, Wonderland, and Narnia, Sesame Street exists within a child's imagination.  It is a fully realized location that is tangentially related to our world.  Thanks to the magic of television, children around the world can peer through a window into this special world.

A world where humans and monsters walk and in hand, where birds can talk and play baseball, and where the most troubling issue that faces the society is "What letter comes after T?"  It is both familiar and unfamiliar.  It is the most welcoming place on earth.  And, for children, it is completely real.  Most of the children featured on the show are not actors.  They genuinely think they are walking around the actual street.  They are conversing with Elmo and Grover and Big Bird, not puppeteers.  Sesame Street is the place everyone wants to be.

But as we grow older, we forget how to return.  As a child, going to Sesame Street was as easy as the click of a button.  But now, it is completely lost to us.  Sesame Street becomes replaced by the real world.  New stressors, new anxieties, new problems take the place of the old furry monsters.

The Sesame Street theme song poses the question of how to get there with an upbeat jangle and optimism.  Children may be asking how to locate the street, but they do it with a giggle because they'll reach it eventually.  But the lyrics take on a more remorseful meaning when sung by an adult.

During the eighth season of Scrubs, in the episode "My ABC's" the imaginative protagonist JD spends the day envisioning the hospital filled with his favorite Sesame Street characters.  It isn't until the end, when he has no choice but to face reality, that the theme song comes into play.  Sung by Joshua Rabin, this cover unearths the melancholy truth beneath the saccharine lyrics.


Sesame Street is not just a place for children to go.  It is childhood.  It seems like a magical far away place because that's what it is.  We cannot return to our childhood, no matter how hard we try.  We can look back fondly on it and celebrate its existence.  But we can never go back.

While we are all familiar with the song, few are aware of the middle verse that is only included on cast recordings:

And then it returns to the chorus, completing the sentence "What a beautiful sunny day."  But look at what happens right before the shift.  They way the song is structured, it sounds as if the lyric is going to be "Every door will open wide to happy people like you, happy people like me."  But the "me" is dropped.  It's as if the lyricist recognized that this song isn't for adults.  It's for the children.  "Every door will open for you kids, but it's too late for me."  And so, he quickly changes the subject ("Ah, look at this beautiful sunny day...").

Growing up is difficult.  Sesame Street realizes this.  It is there to make the transition bearable.  To serve as a reminder that, although it may no longer be accessible, this perfect place still exists, somewhere in our memories. 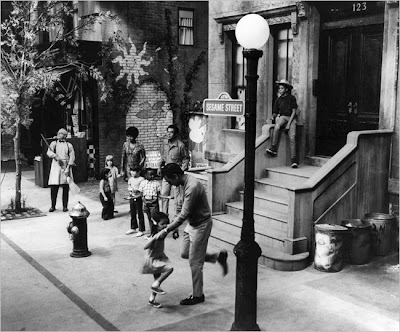 Sesame Street will never go away.
Posted by John H. at 2:52 PM