Muppets from Space, Part 3: From Bad to Worse

Oh, Muppets from Space.  You started a little shaky, but you at least had a promising premise.  But this next batch of scenes makes me so disappointed in you.  I know you're better than this.

So, Gonzo (and Rizzo) are brought before Tambor who has yet to show any signs of being villainous.  But suddenly the music gets very sinister and he pulls out an examination glove in order to test the limits of Gonzo's nose flexibility.

This is...not what I want to think about when I think of a Muppet movie.

Gonzo is still in high spirits, but when he begins to laugh at a joke Rizzo tells, Tambor (who I'll now refer to as Singer, his character's name, since he is no longer good ol' Tambor at this point) flips out and yells at him like a lunatic.  Apparently Singer has gone mad after years of being mocked for his beliefs in alien life forms.  And what's he going to do now that he has one who is in contact with a whole species?  He's going to remove his brain for experimentation.  See, even though Gonzo doesn't know anything about the people contacting him, Singer assumes he is just lying for no reason at all.

This dramatic conflict came out of nowhere and it just makes me feel uncomfortable.  No one is behaving rationally.  We've had 3 movie villains now.  Doc Hopper was ruthless, but he was still human and his goals were clear and driven by business.  Nicky Holiday was outlandish, but his spoiled brat routine was funny and kept with the parodic tone of the film.  Long John Silver was Tim Curry.  Each of these are memorable and classic.  K. Edgar Singer is none of those things.  This is not a slight on Tambor, but it's just the way he is written.  Singer doesn't know what he wants and just behaves irrationally.  Maybe if this was an intentional character choice, I could play along.  But it seems as if he is just doing evil things in order to fill the movies evil quota.  Mel Brooks' cameo in The Muppet Movie was a similar character, but he was parodying mad scientists and stayed true to himself.  Singer is just a hot mess.

As if to further emphasize how stupid this movie is fast becoming, Singer's henchman, Hollywood Hulk Hogan seizes Rizzo, gives a shout out to his fans and promotes his upcoming fights, then tosses Rizzo away because he's doing the evil thing now. 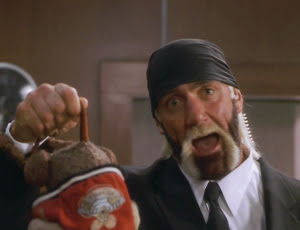 The Muppet Movie had Edgar Bergen in it.

Rizzo ends up in COVNET's rat testing facilities (which is treated like a prison so we can have a bunch of prison movie parodies).  David Arquette is the scientist who torments the rats for no reason.  That's every character's motivation in this film.  "No reason." The Muppet Movie had Richard Pryor in it.

Meanwhile, outside COVNET, the Muppet gang attempt to break in to the facility.  First, Miss Piggy uses her Mind Mist on Ray Liotta the security guard. 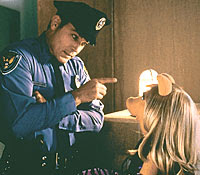 Ray Liotta's okay.  He can stay. 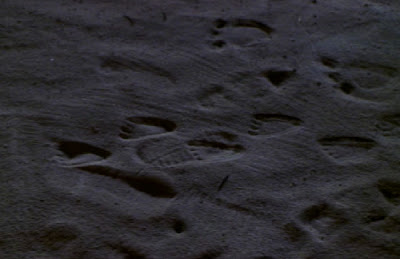 But then we'd lose this neat footprint effect.

Inside, Gonzo waits in a cell and he is fed lunch by Singer's assistant, Bobo the Bear...whose name is Rentro for some reason.  The sandwich Gonzo receives begins talking to him, acting as another communication device from his alien family.  The sandwich asks for a good place to land the spaceship and Gonzo, worried that Singer will try to catch them, tells them to land at the Cape Doom lighthouse.  Bobo overhears this, but he's a nice guy and keeps it to himself for the moment.  The sandwich bids farewell and there is an uncomfortable moment between the two as Gonzo tries to eat it. 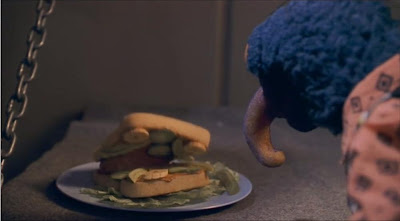 It's okay; the sandwich consents.

But before Gonzo can bite into it, doctors come to prepare him for the lobotomy.  Another Muppets Tonight alum Dr. Phil Van Neuter will be the surgeon.  I'm going to have to come back to the show in a later post, I guess.  There were just too many new characters in it.

Back with the invisible group, Fozzie uses the bathroom and washes his hands afterward, revealing his furry paws.  Professional security guard Kathy Griffin comes across this odd sight and attempts to handcuff the disembodied hands (rather than, I don't know, acting like a normal person).  Fortunately, invisible Animal chases her off, presumably to make her his unwilling bride.  Apparently, this is the best scene in the movie because it warranted an action figure. 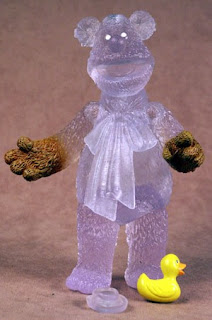 Ah, something to place next to "Usher Scooter" and "Resort Smithers."

Tomorrow, Gonzo nearly loses his brain, making him the most rational character in the film.
Posted by John H. at 2:18 PM