In 1996, following Muppet Treasure Island, the Muppet staff writers got to work on the next feature film.  This time, they decided to leave the boundaries of Earth and go where no Muppet has gone before.  Kermit the Frog was going to be captured by extraterrestrials and the gang would cross the galaxy in order to rescue him.  Yes, it was time for Muppets in Space! 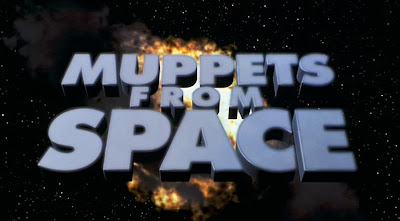 Okay, if you are familiar with 1999's Muppets from Space, you'll know that the plot had nothing to do with Kermit being kidnapped.  It turns out Kirk Thatcher, one of the Muppet Treasure Island writers penned Muppets IN Space while longtime writer Jerry Juhl wrote the script for Muppets FROM Space exploring the mystery behind Gonzo's species.  Juhl's script won out, although apparently the Thatcher script is a funny gem.  Hopefully it will be unearthed one day.  For now, we must see if the film that got produced was worth the effort and expense.

The film opens with a stormy night on ancient Earth, where Noah is preparing to set sail on his ark.  Gonzo hurriedly attempts to board the ship, but Noah denies him access since he is unable to state his species nor locate a companion.  It's a brutal way to start a Muppet movie, having our hero cry out to the heavens in order to be saved from his fatal loneliness.

It turns out that it is just a recurring nightmare that Gonzo has and he's actually safe and sound inside the house where all the Muppets live...for some reason.  I think it's supposed to be a summer house as Rizzo later mentions that Kermit is on vacation, but still, why did they bring ALL the Muppets?  Even Sam the Eagle, Waldorf, and Statler are there and they hate those freaks! 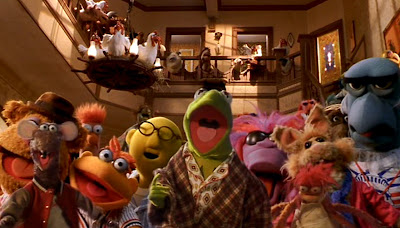 Okay, so Christmas Carol and Treasure Island aside, this is the first "real" Muppet movie since Henson's death.  The characters will be themselves and it'll be like the original three movies.  Each of those movies started with a great original song.  The Muppet Movie had "The Rainbow Connection," The Great Muppet Caper had "Hey, a Movie!" and The Muppets Take Manhattan had "Together Again."  What will Muppets from Space give us?

This was the song used in all the trailers for the film and it establishes that we are in for a different kind of Muppet movie: one that's trying to make as much money as possible.  The soundtrack is comprised of '60s and '70s pop hits, as covered by the Muppets.  And it just feels wrong.  Especially since "Brick House" is not really associated with the family-friendly Muppet-aesthetic.

The song serves to show us all the Muppets we should now be familiar with, including both Muppet Show regulars and Muppets Tonight newbies.  When I originally saw this film, I was able to name every Muppet, except for this guy: 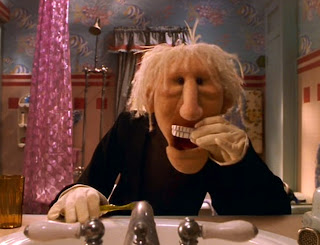 Old British butler man?  Who are you?


Don't worry, I now know exactly who he is and we shall be discussing his character in due time. But I will say that he would have been completely unknown to American audiences, so to see him used so prominently in the song was jarring for my young Muppet fanatic brain to comprehend.

But I digress.  Once everyone has settled down and Kermit commends everyone for "getting down with their bad seleves" (Ed. note: Why movie, why?), Gonzo comes down to breakfast and Kermit notices he's feeling a bit down.  Gonzo expresses his loneliness and Kermit tries to cheer him up, reminding him that he may be weird and unique, but he's not alone.  Not convinced, Gonzo begins eating his "Kap'n Alphabet" cereal which spells out the messages "WATCH THE SKIES" and "R U THERE."  It also provides him with a cheap toy telescope to watch said skies. 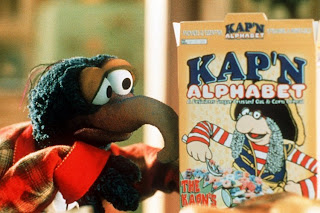 This cereal is part of an awesome breakfast.

Gonzo attempts to relay the message to Rizzo, who doesn't believe him.  However, at the secret government base COVNET, Jeffery Tambor has been tracking similar messages across the globe. 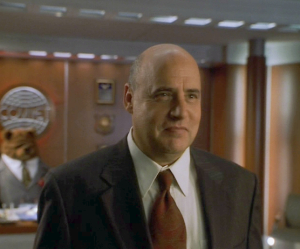 Apparently, he's supposed to find prove that outer space aliens exist and he calls in an army general to look at his findings.  The general doesn't believe him however because there needs to be more proof. 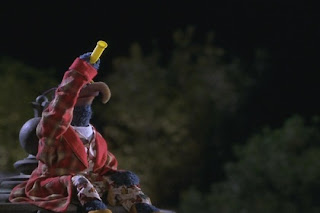 Back at Muppet Beach House, Gonzo stargazes with his plastic telescope while the rest of the crew play poker inside.  Waiting for a sign, his wish is granted as lightning strikes him, sending him on a vision quest through space to the tune of "Shining Star."  There, in the outer-most reaches of the galaxy, he meets two cosmic fish with Indian accents who tell him that he belongs to an alien race. 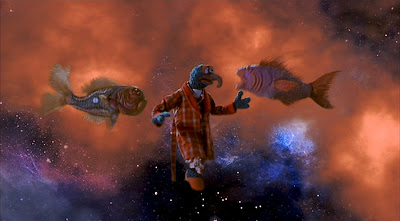 The fish explain that he must contact his people back, preferably by mowing a sign in the front lawn.  Gonzo wakes up dazed, electrocuted, and burnt to a crisp.  He is now a weirdo with a purpose!


Tomorrow, Gonzo scares his friends by being crazier than normal.  Or is he not being crazy enough?  I forget how it works with him.
Posted by John H. at 9:18 PM