Doc Hopper and his cronies have kidnapped Kermit in order for the mad German scientist Prof. Krassman (Mel Brooks) to perform an "electronic cerebrectomy" on the frog, rendering his brain useless and malleable. 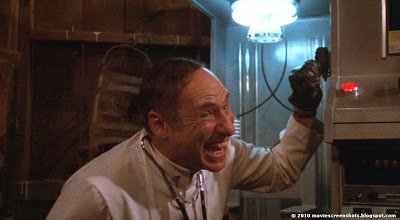 And for a bit part, Brooks really milks every single line he's given.
Like Henson, who often felt he had to conform to the relentless producers during his early years in showbiz, Kermit is about to be brainwashed into performing mindless drivel that doesn't support his values or goals.

Although, it would have been really easy for Kermit to slip out of his restraints.
Piggy, who has been fawning over Kermit the whole time, praising him to be a courageous hero, actually has to step in and save the day as she goes into a violent rage, pummeling every thug in sight.  In true Piggy fashion, it is not Kermit's endangerment that provokes her temper, but an insult about being a pig from Prof. Krassman.  Have you ever noticed how Piggy hates being referred to as a pig, even if there is no malice behind the reference?  She has some serious self-image issues.  But now is not the time to get into Piggy's psyche.
But it is time for the film to break apart, allowing all the Muppets at the screening to provide their two cents while the Swedish Chef fixes things.  I believe this moment was to help skip to the next part of the story in a not so subtle transition, because when we leave our heroes, Piggy has just decided to ditch Kermit by accepting a commercial offer from her agent and when we return, she reappears with little explanation for her behavior.  It seemed kind of pointless and perhaps the film break was to distract us from this moment.

Technical difficulties.
Anyway, we come back to majestic shots of the American landscape as Fozzie sings "America, the Beautiful" as if to remind us that we are watching the American Dream unfold before our very eyes. 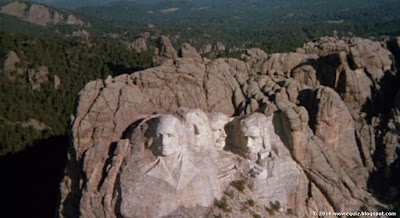 Wait, they are in South Dakota now?  Weren't they just in Idaho?  And they're only a day's drive from Hollywood?
Meanwhile, Doc Hopper has decided to step up his game and has resorted to hiring the frog assassin Snake Walker to hunt down and kill Kermit if Kermit doesn't comply.  At this point, I feel Hopper should just let this go.  But we've got to raise the stakes for the end of the movie somehow. 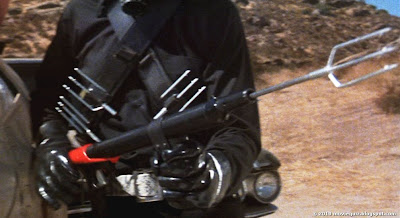 And a pitchfork gun is the way to do it.
As I said before, Piggy rejoins the group after her brief absence with no explanation as to what happened and just acts like everything is normal.  How mysterious.  The best part to come from this random moment is Rowlf's half-hearted attempt to introduce himself to her, even though he knows she's not listening.

Women don't make any sense.
Without warning, the car stops working, leaving the gang stranded in the middle of nowhere.  The team sets up camp for the night, counting their woes, realizing that they won't make it in time for the auditions tomorrow.  Gonzo, however, remains optimistic, as he marvels at the stars above, with his signature song, "I'm Going to Go Back There Someday."
Kermit leaves the camp to have an existential conversation with himself, wondering whether he just made things worse for everyone by dragging them on this journey.  He keeps trying to reject his role in their failure by stating, "I didn't promise anybody anything."  This notion is true of all artists.  They dream big and when they succeed, everybody loves them for it.  But if they fail, then they just become another part of the nameless masses.  Nobody gets hurt because of it.  There is no shortage of art.  The world doesn't realize what it is missing out on.  Like dust specks falling, a dreamer who stop dreaming is heard by no one.
Except, there is a victim.  It is the dreamer themselves.  They are the one with value.  They are the one who is hurt by the failed promises.  By having Kermit physically exist as two entities, we can see that this dichotomy exists in one single artist.  They aren't just the dreamer, they are the audience and the customer.  Ultimately, the art they create is for themselves.  Henson made a lot of people happy, but he always made sure that his work was something that he would enjoy watching.

A deep conversation from the puppet that used to dress in wigs and lip-sync to showtunes.
The way the two Kermits are positioned makes it feel as if we are watching an old-time puppet show and Henson is just below the screen with both of his arms raised.  This is pure.
The pep-talk rouses Kermit's spirits as he heads back to the campsite, only to discover that the Electric Mayhem has found them (courtesy of the movie screenplay) and they shall give them a lift to Hollywood!  As they make their way towards victory, a police officer pulls them over and reveals himself to be good ol' Max. 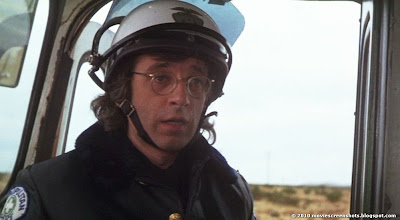 Max's Big Heroic Scene
Max tells them about the frog assassin, warning them of an ambush.  If they continue forward, Kermit will surely croak! 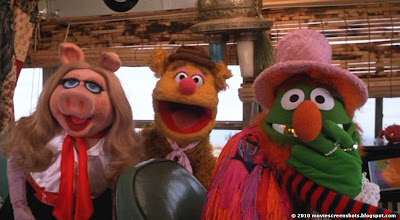 OH NO!!!
But Kermit says that enough is enough.  He is going to quit running and stand up to Hopper once and for all.  Because the movie is nearly over so we need to have a big climactic showdown worthy of a classic western.
Tomorrow: Hopper and Kermit square off and the gang finally arrives at the Magic Store.
Posted by John H. at 2:18 PM