Uplifted by the Christmas cheer in the streets of London, Scrooge wishes to drop in on Fred's dinner party. There, the Ghost of the Present shows Fred and his guests about to play a guessing game.  As in the original, Fred convinces his guests that he is imagining some sort of foul beast but his wife, Clara, realizes that he is describing Mr. Scrooge.

Oh Clara, we only get to meet you for 2 minutes.  At least this version gives you a name.
But there is no time for Scrooge to wallow in the sting of that insult for we have to keep this movie moving along!  Although, I am slightly disappointed, because Fred's party is often a highlight of the story.  Like the Fezziwig scene, many characters come to be merry, and this is a chance for the humans of the movie to show how fun-spirited they can be.  I particularly am fond of the Albert Finney version where the party is so fun that Scrooge gets caught up in the merriment, completely forgetting that he is invisible to the rest of the guests.  He plays the games, dances and stays the whole night, bidding farewell at the end.  Caine does get a brief moment to join in the guessing game here, but the scene moves by so quickly, we do not get to see him have very much fun (although he did come off from a huge musical number in the previous scene, so, that'll do).
Also, Fred usually redeems himself after insulting his uncle, reminding the folks that he does care about him and truly hopes he will one day celebrate the holiday with him.  Here...he's just mean.

It's not a real party until Fred starts bashing his relatives behind their backs!
The Present then takes Scrooge to see the Cratchit family.  We meet Mrs. Cratchit, played by Piggy, who is (I'll admit) perfect for this role.  She keeps her usual brash demeanor to a minimum and only lets loose at the appropriate moments.  I also find it cute that the Cratchit daughters are pigs while the boys are frogs (and that they each inherit their respective parent's attributes).  Steve Whitmire and Dave Golez do their best Miss Piggy impressions while playing the daughters, poking fun at Frank Oz's style.  The self-parody is greatly appreciated.
Suddenly, the sounds of Bob and Tiny Tim are heard as they arrive home from church.  This is a nice moment from a technical point of view because we have Kermit walking and carrying Robin who is moving at the same time.  And their little song is adorable!
They go inside to begin their meager feast as Tiny Tim gets overexcited, igniting a horrible coughing fit. This is one of the few depictions of Tim that presents his sickly nature so vividly, but at least Robin has the poise to keep it from becoming obnoxious and overbearing.
As the family settles in, Bob arranges a toast to Scrooge to acknowledge his help in providing the dinner.  Mrs. Cratchit objects, but Tiny Tim pipes up to prevent his family from fighting, reminding them all that at Christmas, God blesses everyone.
Once again, the Muppets lay on the saccharine charms without becoming too preachy.  The family comes together, moving Scrooge to the core.  Caine manages to bring the vulnerability out of the character as he truly responds to the frail child.  When the Ghost of the Present informs him that the child will likely die, he echoes Scrooge's harsh words to the charity collectors from the previous day.  Often, the Present will continue talking, but here, he lets the weight of Scrooge's earlier close-minded logic say it all.  This family is precious, and Scrooge cannot deny that.

As long as you have family, it is still Christmas.
Scrooge notices that the Present is rapidly aging, and the Present explains that soon, he will be gone from this world.  He leaves Scrooge behind with a hearty laugh, rather than the original words of doom and gloom used to truly make Scrooge feel bad about himself.

I like you too much to scare you.  I'll save my spooky speech for when I visit the Grinch next year.
However, Scrooge is not out of the woods yet, as he still has one more ghost to encounter.  As a foggy mist signals the arrival of the Ghost of Christmas Yet to Come, Dickens and Rizzo decide to bow out of the story, understanding that the next few scenes are supposed to be taken very seriously.  Don't worry, we'll see them at the end. 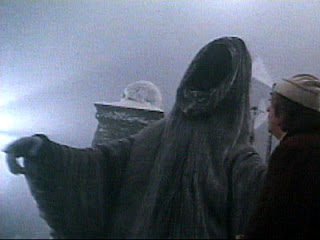 It is time for the nightmare to begin!
The frightening wraith silently leads Scrooge about a dismal Christmas future, where in a person's death has greatly affected the entire community...for the better.
From the elite businessmen who joke at his passing... 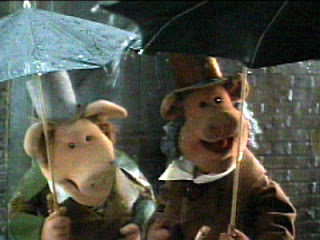 On their way to the piggy bank, I suppose.
...to the low-class scavengers hoping to make a profit off of his demise... 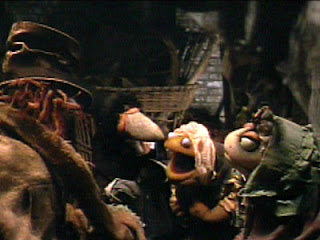 Why is it the ugly Muppets always get cast in these kinds of roles?
...everyone is happier now that he's dead. 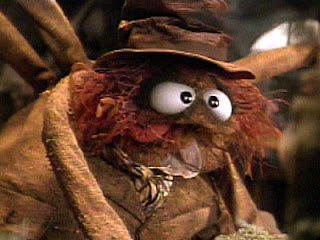 Especially the spider Old Joe,* who can finally sell some nice bed-curtains with rings.
Scrooge, acknowledging that this fate could very well be his own, pleads to see some tenderness with death.  Taking him at his word, the Ghost brings him back to the Cratchit house, where his worst fears come true.  After only getting to know the boy for a brief period, he learns that Tim croaked.** 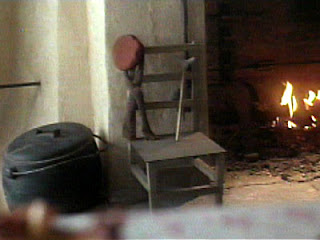 A vacant seat by the poor chimney corner.
The premature death of a child is handled with sublime dignity and Scrooge finally feels genuine sympathy for another human being.
Tomorrow, we shall discuss what becomes of Scrooge's future, as well as the final verdict on the film.
*The design of Old Joe is wonderful and it is too bad this was his biggest role.  His voice performer was a British radio personality and not a Muppeteer, hence why he only appeared just this once.  Spiders are rarely seen in Henson's world, so it is great to see a giant one in action.
**I apologize for the horrible pun, but this is the only version in which I am able to make that joke.
Posted by John H. at 11:13 PM