The next stop on the journey through Scrooge's past is at Fezziwig's...I mean, Fozziwig's rubber chicken factory.  As in the book, a great party ensues, allowing for many Muppets to make their cameos.

The gang's all here!  Just don't expect them to talk much.
The Electric Mayhem provides the music for the party and, although no words are spoken amongst them, we have a nice callback to their rock-and-roll roots as Animal goes wild, being unable to conform to the slow paced music required of him.  Rowlf plays the piano while the Swedish Chef prepares some singing food.  And, of course, Fozzie takes the stage to prepare a speech, only to be heckled by the Marley Brothers.  It's like The Muppet Show condensed into one minute.

Back in their natural habitat: the balcony.
As the party continues, young apprentice Scrooge appears to go over business matters with Fozziwig.  The bear instructs him to cut loose and just enjoy the party for once.  Here, I noticed another choice that this adaptation makes, setting it apart from the others.  This scene, coupled with the previous school scene shows that Scrooge's materialistic tendencies are already emerging at this young age.  Usually, this does not occur until after he leaves Fezziwig behind.  This allows Scrooge to associate his years with Fezziwig as being a time when Christmas was delightful for him, before he turned miserly.  By changing young Scrooge's motives, it shows him as always being disconnected with his Muppety surroundings.  Perhaps this explains why older Scrooge feels so out of touch with the world.
He never belonged in the first place. 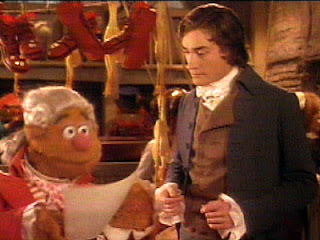 I find it so hard to mingle with the guests when I have to avoid stepping on the puppeteers.
After meeting the lovely Belle, Scrooge implores that the Ghost of Christmas Past not show him what happens during the following Christmas, for he has avoided thinking about it for so long.  But you cannot choose what happened or didn't happen in the past.
Belle is now Scrooge's fiance, and she fears that his devotion to monetary gain has gotten out of hand.  She tells him that she used to love him, but now doesn't feel the same way and walks away.  Elederly Scrooge is brought to tears and...wait...that's it?  The scene is already over?  She broke up with him in less than a sentence?!  How rude!  She didn't even explain herself or give him a chance!

I belong with a man who can keep up with me.  Time is money, you know.  I've got places to be.
Something is clearly amiss.  If you are familiar with this film through home video then you are probably aware of what goes here.  There is a song that Belle sings called "When Love is Gone" that was cut from the theatrical version.  Apparently, the children in the audience could not handle an extended period of time without any Muppets on the screen, so the whole number was removed to maintain the audiences interest.  All that is lost is A MAJOR PLOT POINT/THE DEFINING MOMENT IN WHICH SCROOGE TURNS TO THE DARK SIDE COMPLETELY!  Although, I'm afraid to admit that, as a child, I would fast-forward through the song whenever it occurred because romance is boring.  However, I shall make up for that now by presenting the beautiful song, restored, as it should be.
Facing your past mistakes is hard.  So when Scrooge is forced to face them, he cannot help but break down, weeping.  This stern man is reduced to tears over a single incident.  If Caine excels in one area as Scrooge, it is this moment.  Many Scrooge performances remain calm and collected, if not a little saddened by the end of these memories.  Having him cry sheds a whole new light on the character.  And having him cry without the song to set it up?  Well, that creates a... different effect.
Usually, Scrooge becomes so enraged by the scenes of the past that he physically wrestles with the Ghost to extinguish it once and for all.  This metaphorical tussle is one that people endure every day.  The regrets of the past cannot be eliminated, only forgotten about for a while.  Caine's Scrooge takes a different approach by choosing to wallow in his mistakes, beating himself up, instead of the Ghost.
At any rate, his sorrow causes the Past to leave, returning Scrooge to his bedchambers.  When the clock strikes, he is beckoned into the adjacent room by a new spirit, the Ghost of Christmas Present.  Like all depictions of the character, Christmas Present is represented as a giant, red-haired man decked in a green robe with a wreath of holly upon his head.  Like a youthful Santa Claus, he is filled with great mirth and song.  The Muppet version takes this character a step further by giving him severe short-term memory loss (because he always lives in the present, you see).

He's just like the guy in Memento.  And Hagrid.
While most Scrooges fear this beast of a man, Caine's Scrooge feels comfortable with him, even joking at times.  When the Ghost asks if he finds Christmas to be enjoyable, Scrooge becomes ashamed, revealing that he understands that he is depriving himself of joy with his own selfish actions.  The Ghost leads him around the current Christmas day to show Scrooge exactly what he has been missing, with the fun song "It Feels Like Christmas."
This Ghost is far more Muppety than the previous one (the always great Jerry Nelson performs him), and with his introduction, the film picks up in energy and tone.  Yes, this movie is really turning around.  Sometimes it's fun to just let the Muppets do their thing.

Is there anything more whimsical than a Full-Bodied Muppet?
The Christmas joys continue tomorrow, as Scrooge visits the families of those closest to him and learns how he is truly viewed in the eyes of others.
Posted by John H. at 11:26 PM