Scrooge makes his way home as Gonzo/Dickens continues to narrate.  The eerie tone is set as the first supernatural occurrence takes place in the story: the appearance of Marley's face in the knocker. 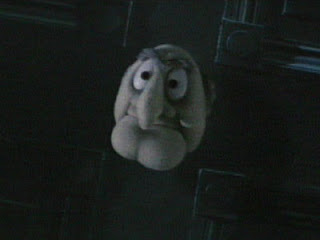 Things have taken a turn for the weird.
We have come to the Marley and Marley scene which leaves me filled with many mixed emotions.  Staler and Waldorf, our favorite Muppet hecklers are both filling in for Jacob Marley (Statler plays Jacob while Waldorf plays his brother "Robert Marley."  Get it?  Have a friend explain it to you if you don't.)  Now, having these two play Marley is really the only casting choice that makes sense (outside of having a human or a brand new puppet play the role) so it is understandable that the laughing duo's joking schtick will carry over into this adaptation.  And there are attempts to blend the Muppet characters' personalities with the Dickens dialogue (as seen with Scrooge's "gravy/grave" line).
But ultimately, this casting choice just feels wrong to me for three reasons:
1)  Marley is Supposed to Be Scary

Our chains and lockboxes are singing with us!  Terrifying!
Here, the movie does manage to maintain some of the frightening elements of the story.  The moments leading up to the appearance of the Marleys is fraught with suspense which only sets up the surprise that the Marleys are the hecklers.  All dramatic tension flies out the window the moment we hear those familiar laughs.  The atmosphere stays the same and Caine reacts with appropriate fear, but the characters and the setting are a bit incongruous.  The reason ghosts are in this story at all is to scare some sense into Scrooge and the audience.  By the end of their scene, the laughter and jokes die down, fortunately, and the creepy images and noises eventually come in.  But this scene seems to depict a battle over whether or not it is being played for comedy or drama.  In the original story, Scrooge does manage to get some jokes in to ease his horror, but Marley remains completely serious throughout.  The humor is subtle and does not impede on the important message of the specters.
2) Marley is Supposed to Be Depressing

Doh! Ho ho ho ho ho!
The whole purpose of having Marley in the story is to show the terrible fate that could befall Scrooge.  His afterlife is filled with pain, suffering, incessant torture of remorse.  He is filled with regret and serves as a warning to Scrooge.  While Scrooge can change, Marley is condemned to an eternity of grief.  He may be the saddest character all of in literature.
The Marley Brothers are having too much fun.
3) Marley is Supposed to Be Like Scrooge

One of these things is not like the other.
The first two points I made can easily be ignored.  Suspension of disbelief.  We are watching the Muppets, so we should expect the Muppets.  That is all fine and good.
But Caine's Scrooge and his interaction with the Marley Brothers just completely misses the point of the entire story.  In another case of telling vs. showing, all of the Marleys' misdeeds are sung about, but their connections with Scrooge end right there.  I shall present the clip (only the song appears below) and as you watch it, ask yourself if you could honestly imagine Caine's Scrooge and the Marleys being similar, like-minded business partners.
Caine is clearly sticking to the original Dickensian text while Statler and Waldorf bring in their Muppety energy and humor to liven up the story.  Therein lies the main issue I have with this scene (and a majority of the movie).  Caine sticks out like a sore thumb because he is the only major human.  While it worked in the crowd scenes, where his lack of felt and foam set him apart from his fellow citizens in a good way, here he is supposed to be interacting with characters with whom he once felt a close connection with.  And they could not be more different.
Consider the 1983 cartoon Mickey's Christmas Carol.  Scrooge McDuck plays the role of Scrooge in this condensed version of the tale.  His greediness is exaggerated to levels that are, fittingly, cartoonish.  His partner Marley is played by Goofy, who is prone to pratfalls and physical comedy.  Here, they are very much channeling their original personas while using them to enhance the story.  Despite the overabundance of humor, the audience allows it because they expect it.  And it works because Scrooge (the duck) is just as cartoony as the world he inhabits.
Caine is playing Scrooge straight.  The setting, however, is fantastical and Muppetational.  For the rest of the movie, characters who were very important to Scrooge are played by humans (his nephew, his fiance).  Marley should have also been a human, because Caine's Scrooge is grounded in reality.  Or, alternatively, Scrooge should have been a Muppet.  Split the heckling duo and have one play Scrooge and the other Marley.  (Of course, then we'd lose Caine, which would upset a great deal of people).  The point is that Scrooge and Marley need to be on the same level for the story to work. 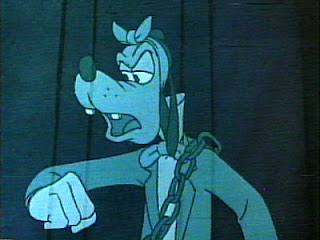 Never underestimate the power of Goofy's dramatic chops.
Anyway...
The clock strikes one and we meet the Ghost of Christmas Past.

Now that's what I call scary!
The Ghost of Christmas Past is always the hardest to portray on film, due to it's intentionally ambiguous nature.  Like the actual past, the Ghost is supposed to be difficult to focus on.  And, like a candle flame, it is always moving and difficult to capture in a single image (hence why it shines brightly and usually comes with an extinguishing cap).  It is unclear as to what age, gender, and size it is supposed to be.  Only one version absolutely nailed what the Ghost should look like and that was the 1971 Richard Williams version (which had the benefit of being animated, so the Ghost could shapeshift continuously without settling on a solid form for longer than a second).  The Henson version, however, is probably the best live action portrayal available with the added benefit of being a puppet rather than a human.  The sheer bright light it emits paired with its smoky form allows the character to remain shrouded in mystery.
And thank goodness it is not Miss Piggy playing this role.
The Ghost takes Scrooge on a flight into the past, and Dickens makes sure to come along for the ride.

Oh Gonzo, your distractions are always welcome in this movie.
They end up at the school were Scrooge was enrolled.  This prompts another scene that kind of misses the point of the original story, but the intentions were good.  In the story, we see Scrooge left alone at the school for many Christmas breaks.  His resentment for the holiday grows, but finally, one year, his dear sister arrives to bring him home, explaining that their cruel father has had a change of heart.  This scene shows where the seeds of Scrooge's animosity towards Christmas began, but it also shows him that Christmas can become a joyous time thanks to a change of heart and a chance to be with one's family.
In the Muppet version, his sister is not present and we only experience his interactions with the schoolmaster on his graduation day.  The schoolmaster is played by Sam the Eagle, who of course only thinks of the good of America.

Er...I mean, England.
The scene shortly ends thereafter, but there was actually a song recorded for this moment that was dropped from the movie for time.  (There was also one for the collectors Bunsen and Beaker called "Room in Your Heart" but it is not really necessary and would have broken up the flow of the early scenes.)  Sam's song "Chairman of the Board," describes how Scrooge will grow to be a great businessman.  This is not present in the book, but it does present an explanation to why Scrooge decided to become focused completely on business.  The song is also humorous and would have been a great addition to the film.  Without it, the scene just feels to be lacking something.
Tomorrow, we shall finish Scrooge's trip to the past, where love is introduced and taken away.
Posted by John H. at 10:39 PM