The Muppets' Wizard of Oz, Part 4: If I Only Had a Cameo

Captured by the Flying Monkeys, Dorothy finds herself to be the victim of the Wicked Witch's...reality show?  The Witch decides to record herself stealing the Silver Slippers and, since she can't just take them off Dorothy's feet, she has to slice them off with an over-the-top buzzsaw.

Meanwhile, the imprisoned Lion tests out his comedy chops on the Flying Monkeys, and soon he convinces them to close their eyes and give him the keys to his shackles under the guise of a magic trick.  He manages to save Dorothy, who prepares to fight the Witch in a diva-off.  Suddenly, we cut to...Quentin Tarantino? 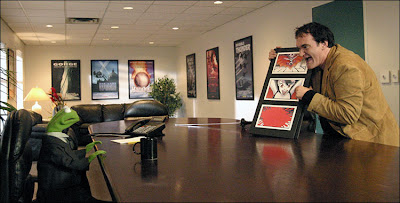 Now we break the fourth wall?

In a bizarre cameo, we see Tarantino pitching a Kill-Bill-esque fight scene to Kermit in a movie studio office, hoping to get it used in the film for the climactic brawl.  Kermit turns down his offer and Tarantino decides it'll be better for Dorothy to just kick the Witch in the face.  Kermit agrees and we cut back to the movie.  That was fun! 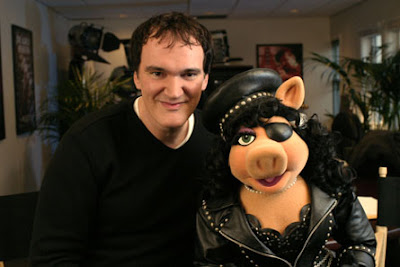 Dorothy kicks the Witch into her bathtub which is supposed to be filled with bottled water but was unknowingly topped of with TAP WATER!  This causes the diva to melt, leaving behind her magic eye and her magic biker cap.  The cap allows Dorothy to control the Flying Monkeys and she orders them to fix her friends, the Scarecrow and the Tin Thing.

After everyone is patched up, the whole gang returns to the Emerald City and demands to see the Wizard.  They barge in without the magic green glasses and find that the Wizard's lair is a lot less impressive than it originally seemed.  In fact, it's just made of undecorated plywood.  They discover the "Wizard" hiding in a control module in the center and find that the Wizard is simply Jeffrey Tambor. 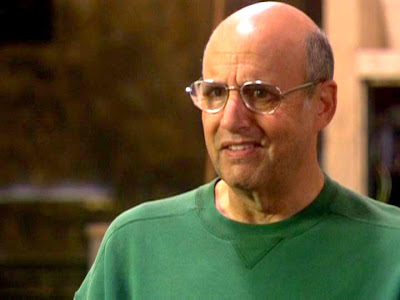 I've made a huge mistake.

The Wizard reveals himself to be a tour-bus driver from California who found himself in Oz and was elevated to the position of Wizard when everyone fell for his thumb-removal trick.  He claims that he didn't expect Dorothy to actually succeed with her quest, but since a promise is a promise, we will try to get the gifts for her friends.  All he needs is a couple hours. 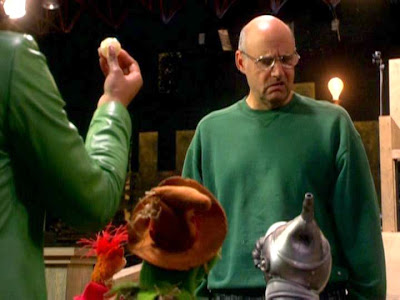 Check back for the conclusion where gifts are received and we learn that there is no place like home.
Posted by John H. at 4:46 PM