This Side of Paradise

Last year, I noted that the Fraggles' winter solstice holiday, the Festival of the Bells, can trace its roots to the traditions of pagan cultures and the origins of our holiday customs that have long been forgotten. But an earlier "Christmas episode" of Fraggle Rock showcases the origin of organized religion itself.

In "Manny's Land of Carpets," Uncle Traveling Matt's latest postcard prepares the Fraggles for an unexpected gift from above.  Having noticed the humans' Christmas routine of sitting on a strange, white-beared man's lap to ask for gifts, Uncle Matt gives it a go.  He asks the red-suited stranger to bring his family and friends up to the surface to reunite with him.  The mall Santa, confused by the request, promises him that he'll make sure his family gets the presents they need. 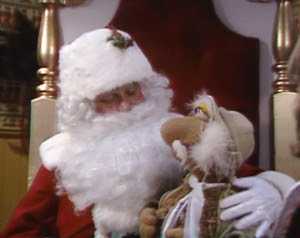 He does exist!  They do exist!

Coincidentally, Doc receives a brand new radio.  Finding the noise unbearable, Sprocket sticks it in the Fraggle hole where it is discovered by Gobo who shows it to the rest.  They surmise that this is the gift from the "magical wish-granting creature from Outer Space" that Matt told them about.  The fact that such a creature exists is already mesmerizing to the simple-minded Fraggles, so when the magic box starts talking, they are transfixed. 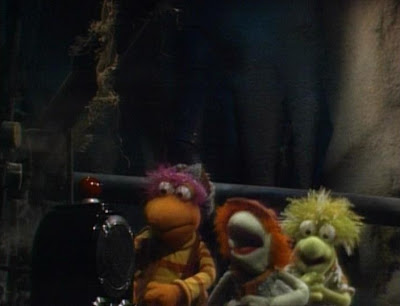 All hail the magic box!

Gobo is the first to hear the radio speak.  It "instructs" him to go to Manny's Land of Carpets, where "happiness is guaranteed."  Gobo acts as a prophet and begins spreading the word to the other Fraggles about the wonderful world of Manny's, where all your dreams can come true.  A mass exodus from Fraggle Rock is in order, but the plans change when some of the other Fraggles hear the wish-granting creature instruct them to go to Bubba's Burger Barn, where they can have "all they can eat!"

A schism develops among the clan, each claiming that the location they heard is the one true path for the group.  Boober, rightfully, sees this box as causing nothing but strife, but even he too is swayed by the box's promise of a place where his laundry whites will look their whitest (Sally's Spotless Cleaners).  Gobo assures people that Manny's is the voice they should follow, because it will have everything they need, including food and laundry.  But still, tension erupts.

Gobo takes some time away from the box to clear his head, and realizes that the Rock is the best place for the Fraggles, because they can't even be sure if those other locations really exist.  He tries to convince everyone to make the most of where they live and not worry about these lofty promises, but the Fraggles still need their gratification.  Giving up, Gobo tells them to just go their separate ways then.

As Fraggle Rock begins to empty out, Gobo sings "Goodbye, Goodbye" to his home.  The words touch the Fraggles so deeply that they decide to get rid of the box, for it is better to be unsure about their future than to throw away the lives they have now worrying about it. 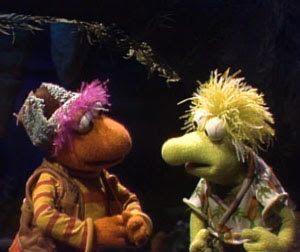 Leave it to Gobo to show us the way.

Before we go too much further, the two songs in this episode are amazing, some of the best I've ever seen in the show.  Gobo's "Follow the Road," which gets everyone excited about the paradise of Manny's is really uplifting and fun while his "Goodbye, Goodbye" just hits you right there.  I couldn't find it on Youtube, but there is a wonderful fan cover that is worth a listen.

Although the Christmas influence is very light in this episode, this is worthy of inclusion in your Christmas library.  There is a lot of controversy and ire over the secularization of Christmas, with some choosing to ignore the religious overtones and others choosing to embrace it.  But the ultimate aim of the holiday (assuming we're optimistic) is to celebrate life and togetherness, no matter what your background.  Gobo learns that worrying about the afterlife too much can lead us to miss out on the beauty of what we have in this one.

Take a moment this holiday season to just appreciate the magic in your life.
Posted by John H. at 7:02 PM