The first original Muppet album to be released after the Disney acquisition didn't appear until 2006, over a decade since the last one.  A Muppet album was a thing of the past, but combining Disney, the Muppets and Christmas was sure to be a hit!  And although the Muppets collaborated with John Denver on a Christmas album before, this would be the first one that they had all to themselves.  So let's take a listen to A Green and Red Christmas. 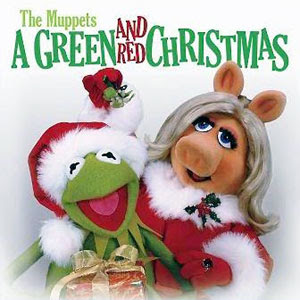 So far, it's meeting all my expectations.

The lead song of the album, "'Zat You, Santa Claus?" doesn't make the best first impression.  This is one of three songs covered by the Electric Mayhem and right away, we understand why there hadn't been a Muppets album in such a long time.  We can only hear the Muppets, and despite everyone's best efforts, the Muppets just don't sound the same anymore (especially since only Dave Golez remains from the original five).  This has been a critique for many fans, and it never really bothered me.  I understood that it was necessary and it allowed others to play their favorite characters.  And for the most part, having new voices is fine.

But if any characters should have been retired, it's the Electric Mayhem.  Apart from Animal, the band only exists to cover songs nowadays.  But with all the voice changes, we lose that genuine aspect that the original Electric Mayhem had.  These are no longer five guys getting together and having fun with their fake band, these are a cheap imitation.  The other two songs on the album, "The Man With the Bag," and "Run, Run Rudolph," don't fare any better.  The band has lost their mojo.  Judge for yourself in their 2009 live appearance at Rockefeller Center.

The second song on the album is also the first original number, "A Red and Green Christmas."  Despite the fact that the title contradicts the title of the album, this is actually a pretty good song.  Kermit and Miss Piggy argue over which color is the definitive Christmas hue, with each one listing holiday elements associated with their choice.  Of course, by the end, they decide that both are acceptable.  It's sweet and inspired.  It's what the Muppets should be.

The other original songs on the album are hit or miss.  Rowlf's "The Christmas Party Sing-Along" does not warrant Rowlf's resurrection and Fozzie's "North Pole Comedy Club" is unbearable.  Good comedy albums get stale after repeated listenings, so who in their right mind would want to listen to bad comedy more than once?  More successful are Piggy's "The Christmas Queen," where Piggy must deal with her insulting back-up singers (and probably would have been really funny with an official music video rather than just a well-intentioned fan-video).  And "Christmas Smorgasbord" is a nice parlay into the world of the Swedish Chef, even if the song is musically bland.

Things are more consistent with the rest of the covers.  Miss Piggy sings "Santa Baby," as she should.  Kermit's "Have Yourself a Merry Little Christmas," while not as memorable as Rowlf's version (or the Muppet Family Christmas version) is still endearing, and Gonzo and Rizzo have a fun rendition of "The Most Wonderful Time of the Year," as seen in the Rockefeller Center clip. 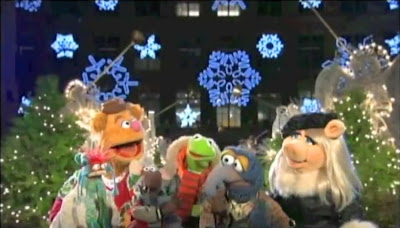 Although the other Muppets aren't featured on the album version, it still does the trick.

As it stands, the album isn't essential, but it has enough going for it that it's worth adding a couple of tracks to your holiday playlist.  But if you were to purchase it, make sure you get the 2011 re-release that was made to promote The Muppets. 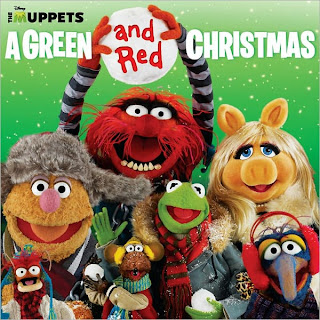 Even if you have to settle for the less charming cover artwork.

There are two additional songs on this version, each rmade after 2006.  First up is Gonzo and Fozzie's "I Wish I Could Be Santa Claus" from the 2008 special Letters to Santa (which I be discussing later this month).  The money-maker, however is the Muppets and Andrea Bocelli's "Jingle Bells."  This song was also featured on Bocelli's 2009 album My Christmas and, as seen in the promotional television special, it is a charming, clever, and funny affair.

This one song is the reason we need a Muppet Christmas album.  It brings our favorite characters together in a way that retains their personalities without giving up musical quality and integrity.  Bocelli adds a legitimacy to the album that is lacking from a majority of the previous songs.  Although celebrity cameos can be hokey, when they work, they work.  So, once you're sick of hearing all the other holiday songs this season, give this album a listen. 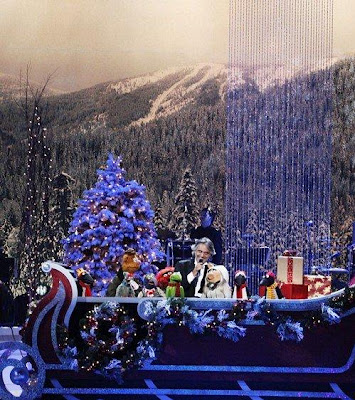 Or give Andrea Bocelli's album a listen.
Posted by John H. at 5:08 PM