It's Christmastime again, and there a plenty of Muppet Christmas specials waiting to be unearthed.  Last year I mostly focused on the specials that Jim Henson was present for.  But many more specials have come about since 1990, so let us see how they fare.

First up is Mr. Willowby's Christmas Tree.  As I alluded last year, Robert Downy Jr.'s dialogue can be difficult to stomach for longer than a minute, but after watching the whole special, I can assure you that, despite the title, Mr. Willowby is barely in it. 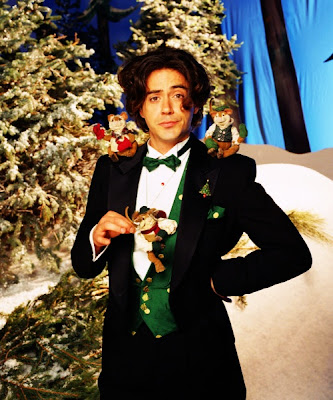 But he makes for a good promotional photo.

Based on the 1963 Robert Barry childrens book, Mr. Willowby's Christmas Tree concerns a mouse family whose goal is to find the perfect tree to decorate their little hole in the wall of Mr. Willowby's house.  They head out to the woods and spot a giant tree, the tip of which the father decrees would be perfect. 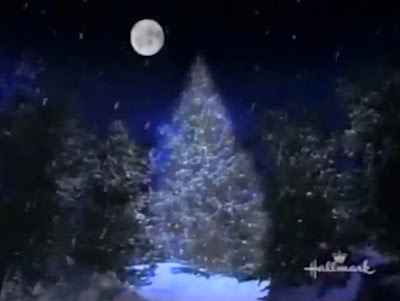 It'll be a shame to waste the rest of that tree though.

The mice climb to the top of the tree, but before they can claim their prize, the whole tree comes tumbling down.  Apparently, they weren't the only ones searching for the perfect tree.  Rich Mr. Willowby has his lumberjacks bring the tree into his giant mansion, but surprisingly, the tree is still too big for the space.  What follows is a series of carvings that result in the mice traveling from home to home, witnessing various Christmas celebrations.

The first stop is the attic where Mr. Willowby's maid Ms. Adelaide (Stockard Channing) lives.  He has his butler Mr. Baxter (Leslie Nielsen) take the top of his tree to her as a gift and she teaches him the Swedish tradition of candles on the head (St. Lucia's crown). 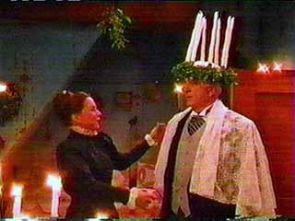 Made famous in various western media to make characters look foolish on the holidays.

The tree is still too big, however, so Ms. Adelaide tosses the tip out the window where the bears from The Muppets Take Manhattan take it too their cave.  Apparently bears have their own Christmas tradition, the Honeypot Shuffle. 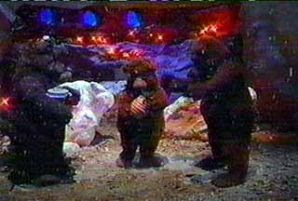 I think we're getting into some strange territory...

The tree tip's next stop is an owl's nest, where owl's play icicles like synthesizers. 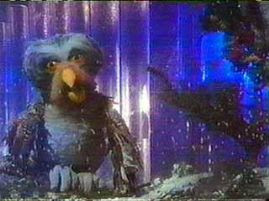 This is what happens in Brian Eno's head after drinking too much eggnog.

Finally, the owl's clip the tip and the mice end up back home with the perfect tree.  And everyone has a great Christmas. 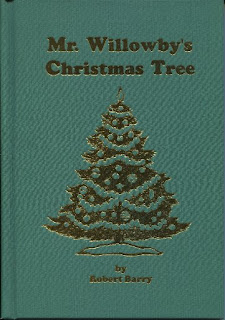 The story is a cute little tale that seems as if it belongs in its storybook format, especially since it is quite repetitive in tone.  But despite some overacting and silly dance sequences, the story of the mice family remains solid and charming.  It is established early on that mice fear people, bears and owls, so, by taking this journey, the mice find that their predators aren't too different from them, and the predators take a chance to be compassionate to the mice and let them join in their holiday fun.

The quest for the perfect Christmas tree can resonate with many people.  We are reminded that no matter who you are, we all want to have a perfect holiday.  And it is better to share it with others than to remain alone.

Of course, once December 26th hits, all bets are off. 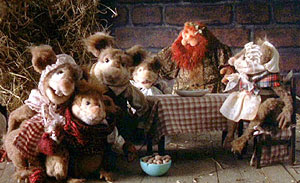 Hopefully the Ghost of Christmas Present will protect them!
Posted by John H. at 5:21 PM