Sarah and Hoggle discuss the fact that she referred to him as a friend in the previous scene.  However, this tender moment is short-lived as a new menace threatens their well-being.  Hoggle runs away, but not before Sarah can snatch his bag of jewels (Too much symbolism is occurring, I'm not going to be able to ignore it for much longer).

As Hoggle escapes, Sarah discovers a large furry creature being harassed by a group of helmeted goblins with snarly-fetus things on sticks.  Sarah manages to rescue him with the help of magically appearing rocks.  The beast's name is Ludo and he will be playing the role of the Scarecrow.  His dim-wittedness and monosyllabic speech makes him baby-like and audiences everywhere fall in love with the movie's breakout character.

Ludo establishes that he wants to be Sarah's new friend, and although he cannot help her figure out the Labyrinth, it is nice to finally have someone on her side who isn't so wishy-washy.

The two come upon another set of doors, but these are adorned with sentient door knockers.  More comedy ensues as one of them is deaf (due to the knocker's placement in his ears) and the other one can barely speak (since he holds the knocker in his mouth).  It is moments like this that bring to mind another "girl in a strange land" story, Alice in Wonderland.  The nonsensical nature of these episodic encounters are very amusing, and become more entertaining than the characters who stick around for a long time.

Don't grow too attached to these characters.

Sarah and Ludo progress, but Ludo shortly disappears into a pit.  As Sarah calls out for help, Hoggle hears her pleas and decides to come to her aid.  But Jareth once again stops him and reprimands him for helping Sarah instead of hindering her.  He threatens to place him in the Bog of Eternal Stench if he continues his chivalry.  As if there weren't already enough classic stories being borrowed from, Jareth lays out two more familiar plot points.  First, he gives Hoggle a piece of fruit that he must tempt Sarah into eating. 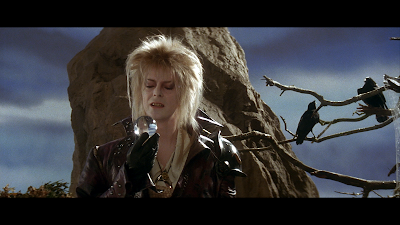 And yes, the fruit came from one of Jareth's balls.

Second, if Sarah ever kisses Hoggle, he will become a prince....of the Bog of Eternal Stench.  Hoggle gets the message and scurries along his way.

Sarah's searches for her new friend prove fruitless as a gang of creatures known as Fierys surround her and goad her into joining their celebrations.  Although they appear demonic, they are more impish and fun-loving as they sing a song encouraging Sarah to forget her troubles and just lose her head, literally.


You have to forgive the green-screen effect being used to pull off this musical number and instead enjoy the puppetry on display as each creature is able to come apart and form different shapes with their bodies.  Like the Magic Dance, it is hard to fully grasp what is happening in this scene, but the end result is that they want to behead Sarah and she must be rescued.  Fortunately, Hoggle appears in the nick of time.  She thanks him with a kiss and we all get to take a trip to the Bog of Eternal Stench!  Yay!

Not to be confused with the Swamps of Sadness.

The two manage to avoid falling into the marsh which, let's be frank, is just an excuse to through as many fart noises into one 5 minute sequence as possible.  Ludo somehow managed to end up here as well, and they all spy a bridge that leads out.  However, the bridge is guarded by my least favorite character in the film, Sir Didymus. 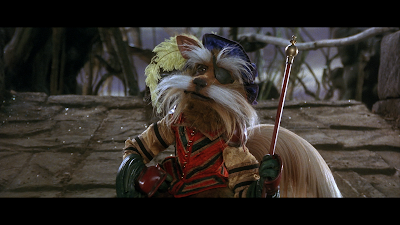 Here we have the Cowardly Lion avatar, although instead of lacking courage, Sir Didymus is too courageous for his own good.  This scruffy dog speaks like an English knight and upholds his duty to protect the bridge.  My biggest issue with this character is that in a film that is trying to distance itself from the Muppets, Didymus as Muppety as they come.  Unlike Hoggle, who deals with the inner struggle of choosing his own safety over Sarah's, or Ludo, who stays quiet yet is capable of showing great emotion, Didymus just has one character trait and never strays from it.  Hoggle and Ludo each form a bond with Sarah.  Didymus just kind of joins the party because four is a better number than three.

Although his design is unique, he is not as complex as Sarah's other companions.  The only special thing he can do is ride on an actual dog while continuing to talk, but the novelty of that wears out quickly.  He is introduced as an annoyance, and he remains an annoyance.  He barely puts up much of a fight.  The bridge collapses anyway, so it's not as if his part was crucial to the plot.

Anyway, without a bridge, Ludo must summon nearby rocks to form a path through the Bog.  See, because he is so lonely that his only friends are rocks, so rocks listen to his commands.  That is a sweet, heart-wrenching and clever notion.  This allows our heroes and Didymus to safely cross the swamp.

Hoggle briefly considers tossing the forbidden fruit into the swamp, but Jareth's disembodied voice prevents him from doing so. 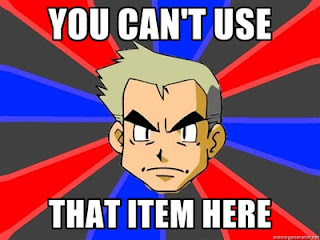 How does he always know?!

Tomorrow, a romance blossoms and childhood innocence is lost.
Posted by John H. at 5:33 PM