The Dark Crystal, Part 4: Darkest Before the Storm

Despite the endless possibilities of letting someone as cool as the Chamberlain join his posse, Jen refuses the Skeksis' offer and hightails it out of the ruins with Kira.  She decides to join him on his quest to the castle and reveals transportation method to cut down their questing time:  Landstriders! 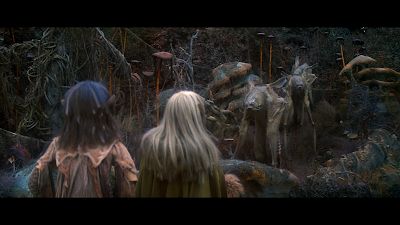 Those bats think they're horses!

Kira calls over two of the stilt-walkers draped in fabric with her ability to speak Monstrosity.  Together, the two Gelflings head straight for the castle.

Speaking of the castle, one of the Skeksis decides that now is the best time to show the audience how the Dark Crystal works exactly.  He takes a Podling from a cage and straps it into a device similar to that from A Clockwork Orange. 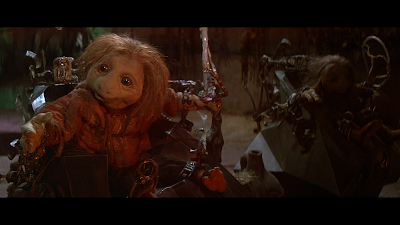 Except there is no head restraint or eye-lid holder, meaning the victim has to be willing to be lobotomized.

The Skeksis explains, to no one in particular, that this room is situated beneath the Dark Crystal and with a mirror, they can shine the light from the Crystal directly into the Podling's eyes, draining him of his life essence.  This will turn him into a soulless zombie, able to do the bidding of his masters.

I CAN SEE FOREVER!

The liquid life essence drips into a vial, which is offered to the new Emperor to restore his youth.  Unfortunately, Podling essence is not as long-lasting as Gelfling-essence because Gelflings are surperior.

Potatoes are not known for being juicy.

This scene lasted just long enough to allow our heroes to reach the castle, which is guarded by Garthim.  They immediately attack the intruders and in a difficult-to-choreograph-fight-sequence, both of the Landstriders lose their lives.

Really, all they take is a slight push and they're down for good.

The Garthim back our heroes up against the edge of a cliff.  All hope seems lost when suddenly, Kira grabs Jen and jumps!  It's okay though, because she has wings.  Clearly, all girl Gelflings have wings, Kira points out condescendingly to Jen, despite the fact that just yesterday she learned that there was another Gelfling in the universe so why would she suddenly know the difference between male and female Gelflings?

Um, these would have been a huge help BEFORE our Landstriders were eaten!

Frodo and Sam make their way into Mordor through the back entrance at the base of the cliff and once again run into the Chamberlain.  I would make another nitpick about how they had previously ditched him at the ruins and travelled on swiftly moving animals and somehow he caught up with them easily, but that doesn't matter because the Chamberlain is the best!

By all accounts, it doesn't make sense.

The Chamberlain makes one last appeal for peace and Jen again refuses and attacks him with the crystal!  So it's understandable that he would get rid of Jen by crushing him with a pile of rocks and kidnapping Kira to present to the Skeksis!  He reveals to his former brethren that he has captured the last Gelfling and she is to be sentenced to death!  However, the vain Emperor decides to strap her to the Life-Sucker so he can remain youthful.  Either way, the Chamberlain is welcomed back into the clan and all is forgotten.  But I can't help but wonder if he is aware of the possibility that Jen and Kira may possibly escape.  You never know with this guy. 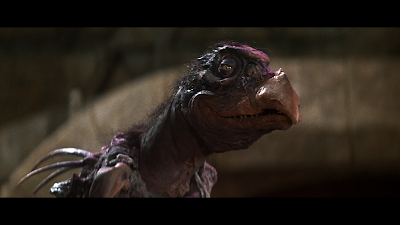 In the dungeon, Kira is hooked up to the Crystal and the life-draining begins.  While the obvious solution to the situation would be "close your eyes," Kira is cursed with her genetic face-paralysis that afflicted her throughout the film.  So it seems as if all hope is lost.

But wait!  Kira has the power to summon animals, remember?  I mean, we've only seen her call the Landstriders once...and she said the Podlings taught her (so why the Podlings never tried this trick before I'll never know).  Anyway, by using the Force, Jen and the caged Aughra tell Kira to use that Thornberry power of hers to free herself.  She dolittles up a frenzy among all the creatures in the dungeon so that they swarm her captor and knock him into the endless abyss where the Dark Crystal resides.

Jen, tired of being trapped by rocks, stumbles into a Garthim nest, which happens to be right next to the Crystal pit.  They destroy part of the wall, and he shimmies up the shaft to escape.

He had better hurry because the Mystics have finally made their way to the castle.  Using their Jedi mind tricks, they are able to saunter past the guards with ease. 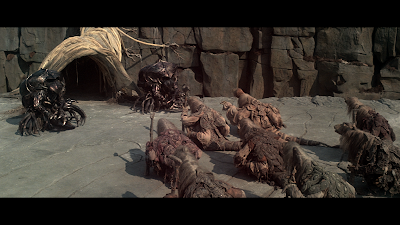 Jen finally makes his way to higher ground where he sees the three suns of Thra converging. He knows his story is about to come to a close.

This is some trippy stuff, man.

The Mystics have arrived, the Skeksis are taking their places, and the suns are in formation.  Come back tomorrow for the conclusion of The Dark Crystal to see if the prophecy comes to light.