But Is It Art?

Frith's final Muppet calendar took the concept of posing puppets in familiar cultural references and made it art.  Classic paintings were re-imagined with the Muppet gang and collected in a treasury known as The Kermitage Collection.  The attention to detail is quite grand, and each piece proves that a lot of effort went into what ultimately was going to be a brief joke. 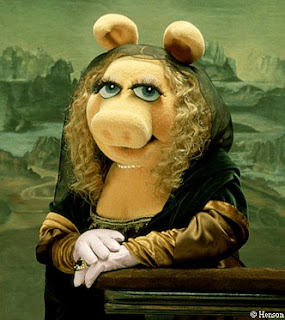 Piggy as Mona Lisa?  Fozzie as Henry VIII?  Gonzo as Whistler's Mother?  Sure, why not?  This is all just for fun anyway. 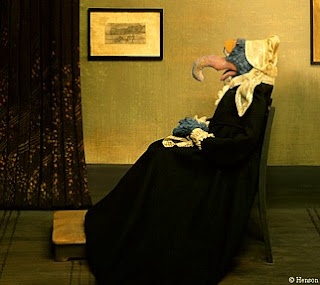 But this collection highlights the bizarre relationship that artists have with the world.  When studying art history, scholars tend to look at how art influences and is influenced by the art of its time.  As the timeline grows larger, trends develop and evolve, with new styles emerging as outdated techniques become artifacts of their era. 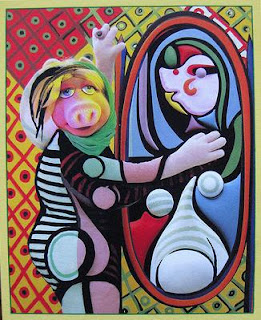 Pablo Picasso's Pig Before a Mirror

So what happens when time continues to march on?  Us humans continue to add to our library of creation.  Art branches off from other art, resulting in a gigantic pool of variety.  Just look at the number of television channels we have and the number of shows each of those channels has produced.  We can be watching Downton Abbey one moment and Here Comes Honey Boo Boo a second later.  We've become desensitized to the various cultures we are bombarded with every day and that means we have to end up choosing our battles.  Are we going to be a Trekkie?  A Twi-hard?  A Brony? 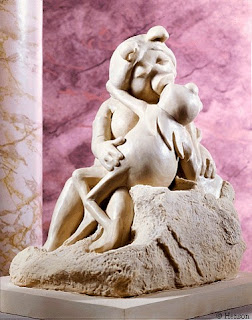 Yet even, through all of these decisions, some art becomes unavoidable.  Few may encounter the readings of Christopher Marlowe, but most have experienced Shakespeare in one form or another.  The canon that makes up our most "pop" of pop culture is an eclectic mix and it is difficult to determine what will stand the test of time. 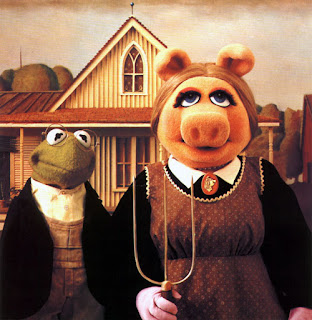 So when Sandro Botticelli sat down to paint The Birth of Venus in the late 15th century, how could he have possibly foreseen the lasting effect of his image?  Or that one day, a plush pig would take the spot of the goddess and be flanked by a frog and two heckling old men? 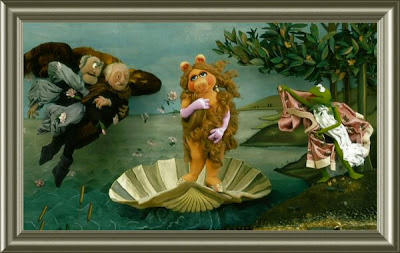 Botticelli's The Birth of You-Know-Who

When an artist creates something, he should not just assume that it will be compared to his contemporaries.  The published art is released into the world, and the world has EVERYTHING in it!  Yes, it's best to look at the context for the intended interpretations, but sometimes, art just becomes a part of the world, open for mockery and ridicule as well as thoughtful contemplation. 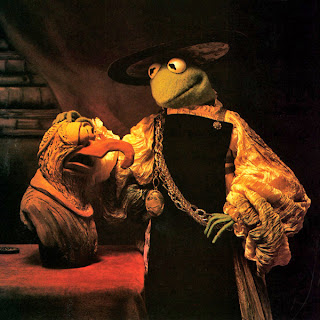 Rembrandt's Arisfroggle Contemplating the Bust of a Twerp

The original works of art were necessary to humanity's cultural growth.  The Muppets were as well, albeit, quite differently.  Are these parodies any better than the originals?  Any worse?  Or are they just as essential to the world?  Only time will tell. 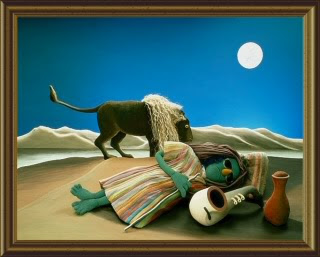