Greek Myths, Part 3: The Man Who Knew Too Much

The story of Daedalus is confusing when compared to the prior two stories of Perseus and Theseus.  The idea of a Greek hero had been well established in the other two stories.  Either they are a super strong half-god who can do no wrong, like Perseus, or a tragic individual who is only trying to do what he feels is best, like Theseus.  Both were men of brawn.  But Daedalus is different.  He's a thinker, supposedly the best.  However, it's hard to say whether or not he is a hero. 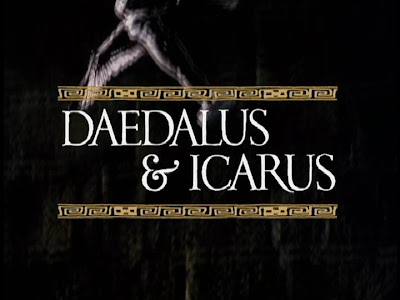 Most people are familiar with the story of Icarus.  In order to escape isolation, inventor Daedalus creates wings for him and his son to fly towards freedom across the ocean.  But the wax used to hold the feathers together melts when Icarus flies too close to the sun, teaching us a valuable lesson in biting off more than you can chew.  For most, the story ends there, leaving Daedalus a tragic victim, but this episode weaves together more of his tales, creating a bigger picture for the character. 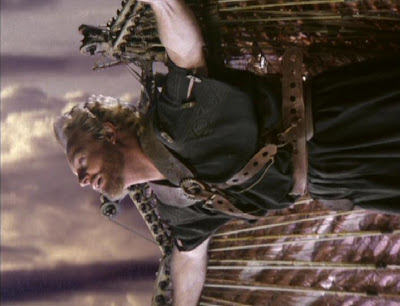 It's not just about flying too high.

Daedalus also had a nephew known as Talos, who was just as smart as he was, possibly smarter.  In the original story, it is unclear whether or not his rivalry with Talos occurs pre- or post- "Icarus incident," but here, we see it as an influence on the later misfortune.  Originally, envious Daedalus attempted to murder Talos by throwing him off the Acropolis and Athena spared the boy by turning him into a partridge.  Here, Talos gets no such luck, and dies.  But the murder is treated more as an ambiguous accident, where Daedalus goes momentarily insane over the fact that Talos is more talented than his own son. 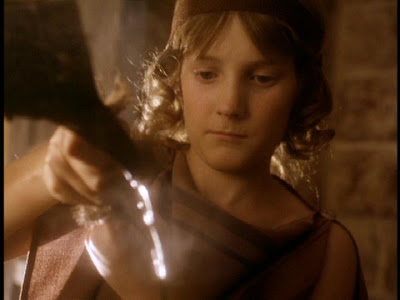 The wunderkind Talos, building a saw.

A recurring vulture appears to Daedalus, tormenting him over his own insecurities.  It is what first prompts him to kill his nephew, and again it appears to remind him of his crime.  This is an original character used to tie the two tales together, even though the flying boy motif was enough. 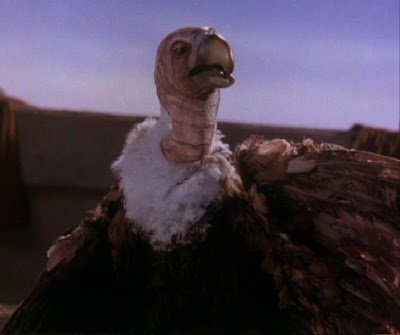 Once in Crete, Daedalus builds the Labyrinth to house the Minotaur for King Minos (as seen previously) and since Minos doesn't want the secret about his bull-child/maze layout getting out, he imprisons Daedalus and his son.  Daedalus escapes and Icarus flies, etc., etc., and childless Daedalus ends up in the service of King Cocalus.  When Minos searches for the intelligent escaped prisoner, he issues a contest in which a thread must be passed through a spiral seashell.  Daedalus ties a string around an ant and allows the ant to pass through the shell maze, allowing King Cocalus to win the challenge.  Minos finds Daedalus and plans to execute him. 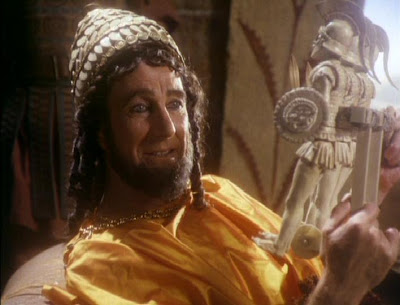 Well, it's clear that Minos is a meanie.

Daedalus, having also designed Minos's plumbing system, manages to boil Minos alive while he is in the bath, thus allowing Daedalus to escape.  And live happily ever after, I guess?

This is where we run into the issue of Daedalus?  Is he a hero?  He manages to kill three people due to his intelligence.  One is by accident, one is on purpose, and the other is ambiguous.  But I suppose this is a series of myths that was told to remind us that the world is not black and white.  We don't always have clear cut heroes and villains.  Daedalus is not necessarily someone to root for.  He is someone to pity.  His downfall is not his intelligence, but rather how he handles himself due to his intelligence.

Sometimes, the smartest thing to do is just to stay out of trouble.
Posted by John H. at 4:09 PM